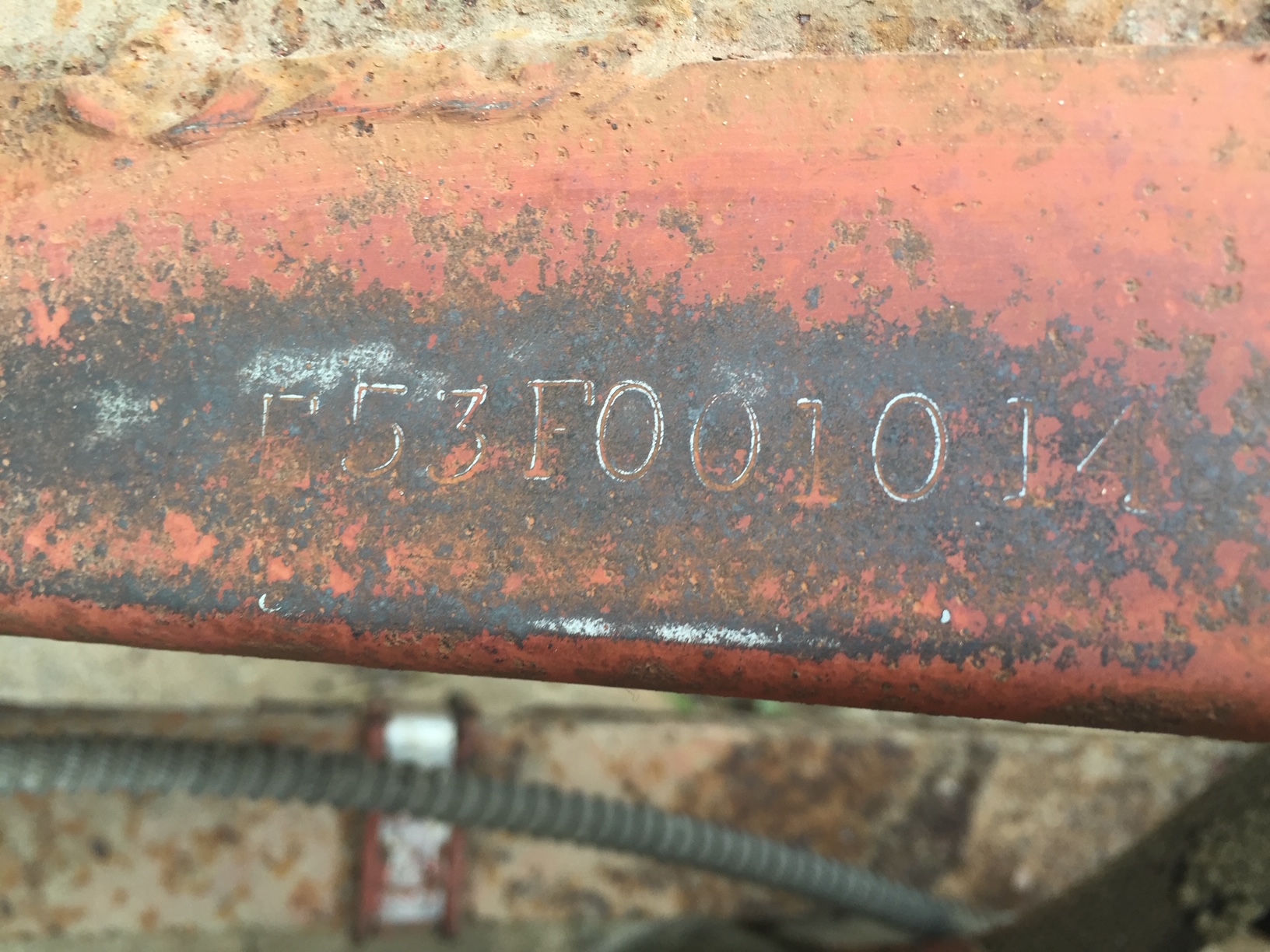 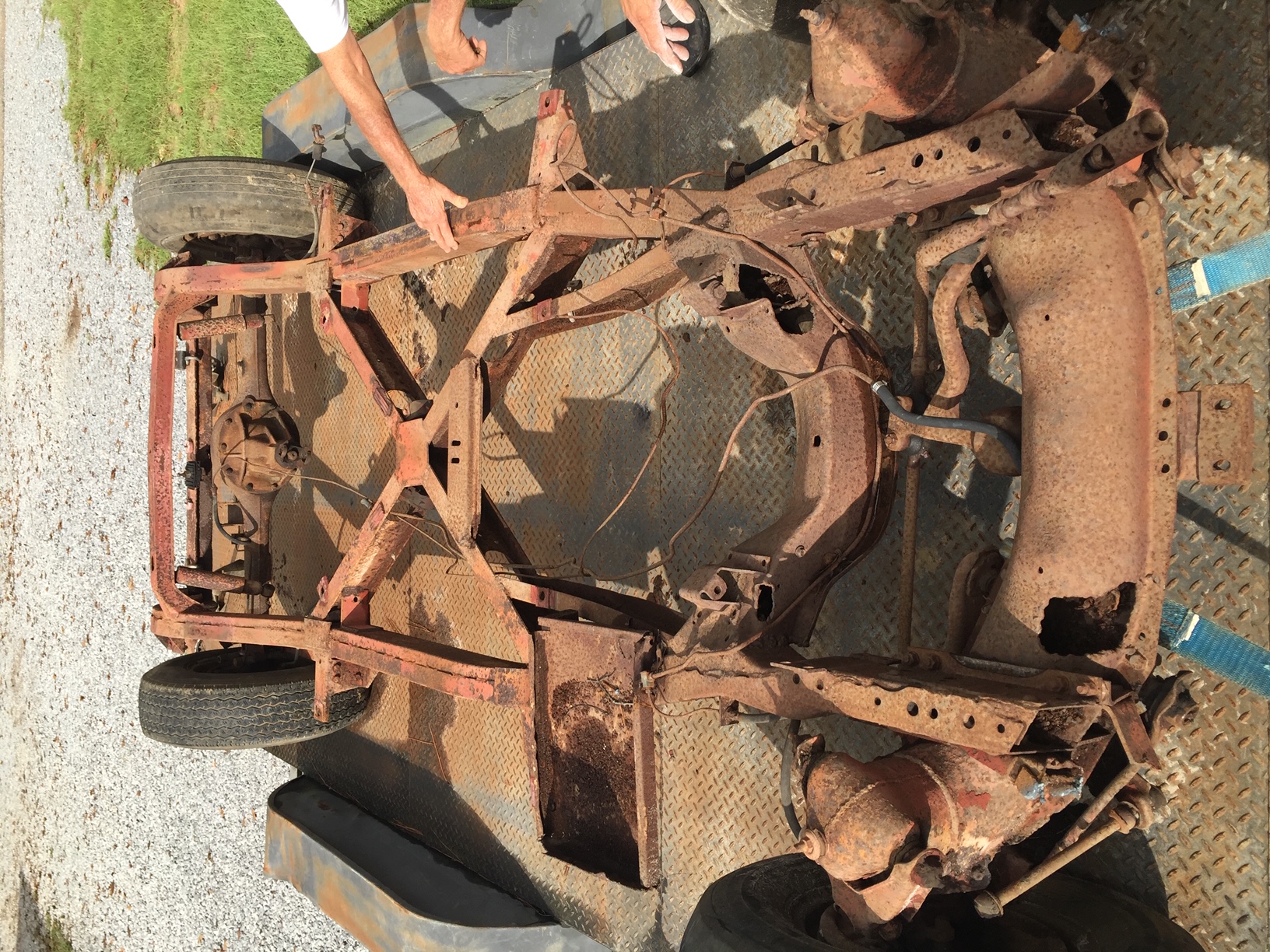 It's not every day you get a call about a corvette, much less one you just sold to a guy. We found a 1956 Corvette in a garage that was mostly complete and in farily good condition, and instantly knew who was going to end up with the car before we even had it loaded up on the trailer. A very good friend of the familys, who had restored several mid years in the past and a few other old hot rods was in the market for his next project to keep him busy. Well needless to say he ended up taking it home before we could even unload the car off our trailer. Now, this is where it gets interesting, I get a phone call a few days later saying hes having problems find the Vin stamped on the chassis. Come to find out hes been working none stop and has already blown the car completely apart and is ready to send the chassis to the sand blaster and wanted to mark off the vin location on the chassis, so it dont get damaged, and cant find it. So, once I free up some time i jump in the truck and head to his house. I round the corner behind his shop where the chassis is sitting, and it hits me instantly that hes been looking in the wrong place. I ask for a piece of sand paper and some water to start clearing off the surface rust, and instantly see 53 at the start of the numbers. Kind of odd to knowing they didnt make many of those in that year, but certainly not uncommon for chassis to be swapped out. I finish cleaning the numbers and realize real quick the ending reads 001014, meaning this is the chassis to the #13 corvette ever produced. I turn to my friend and ask what the plans are for the car, and he goes on to tell me he's going to cut it up and make a Pro Touring car out of this one to enjoy. Shock hits my face and I turn back looking at the numbers and tell him what this chassis actually is. To him its a chassis he's about to get the tourch after and start cutting, to me its something much more. I tell him, i have a spare chassis out from under a 57 corvette and i would love to trade him, he turns and looks at me and ask if im for real. Needless to say i brought that chassis back to my shop that day and put it in the corner. My father couldnt believe the numbers, nor anyone else who seen it, and they certainly couldnt believe that i traded a good rust free chassis for the pile of rust that was Chassis #13, but i didnt care. Flash forward serval Days or even a week and a half, and i find myself looking at pictures of Serial #13 on a Restoration Website up in the North East. Going over the pics i notice how nice the restoration was and the story they had written about how it was serial #13 and that this little old lady had owned the car since like the 80s and they had just completed the restoration and she was enjoying showing off the car. I wondered to myself if they even knew the chassis under that car was wrong, so I gave them a call. The owner of the restoration shop started telling me all about the car, so I asked him if the chassis was the original. He told me it was an original style 53 corvette chassis but they never checked the numbers, because the knew the entire history of the car to day one and didnt need to questions the numbers. Once he finsihed that sentence I just openly told well, the original chassis to Serial #13 1953 Corvette is sitting in the corner of my shop and I was wondering if they had any interest of putting it back with the original car. He said yea right, quite pulling his leg or something to that nature, so I asked for his cell phone number and texted him the two pictures above while we was still on the phone. After a min or two, he said his phone had digged and he had gotten a text, I could certainly tell when he looked at the pictures he knew just what he was looking at, because he said a few choice words, and said let me call the little old lady and ill call you right back. About 20 mins had passed and he calls me back, saying she certainly would like to have the Chassis to go back with the car, and we strike up a deal and shipper picked up the chassis and back with its original body and vin tag it went. It was relized that a 3 Star General had bought the car originaly in Washigton D.C. in 1953, after being relocated to Florida a year or two latter the car started changing hands, and some time in the early 80s the car was sent to a dealer in california where the little old lady bought the car and has had it ever since. But during its time in Florida the cars chassis was swapped out and put under the 1956 corvette I found, I know this because that car was bought in Florida in the 80s and came to Alabama to the gentlaman I bought it from. Not knowing for what reason or who done it, we just now know that the 1953 Corvette Serial #13 is complete once more.

<  Back to Barn Finds
Speed Digital